UPDATE THURSDAY AM..Good news!! The fawn was spotted twice in our yard today with his mother and seems to be doing well!

After dropping off Luke at the school bus yesterday morning I found a dead newborn fawn in our driveway.  My heart completely broke!  Sick to my stomach I hurried  back to the house, and…imagine my surprise when  I saw this a few feet from my front door!!! 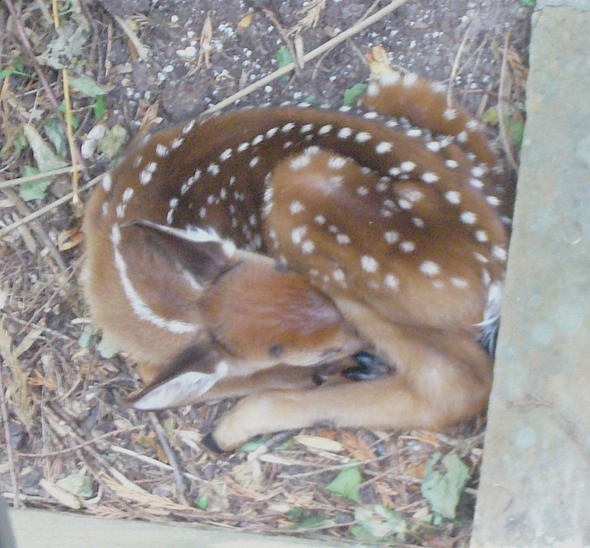 A newborn little fawn, that looked just like Bambi was curled up sleeping.

I was worried that he might be sick or dying, but I saw he was breathing. In a panic to save him I called Animal Control and asked them to send out an officer. In a hurry I googled  wildlife rescue, and was excited to find an organization in Virginia that helped wounded wild life!!!

The helpful woman on the phone walked me through what to do, and what to look for. Where there flies around him ? No. Did he appear hurt? No. As I’m talking to her the little fawn lifts his head and looks around, then goes back to sleep.

I was told it was simply a newborn baby sleeping. Apparently the deer mothers give birth somewhere they feel it’s safe, and then come back and feed them 3-4 times a day. The mother had simply jumped the fence to give birth at our house. I was to open the gate to my fence, and see if it was repeatedly crying of hunger which would be a sign the mother was not coming back, and…KEEP MY DOGS AWAY!

And to call in the evening. If he appears starving, they would come and pick him up and rehabilitate him until he grows up, the  let him out in the wild. 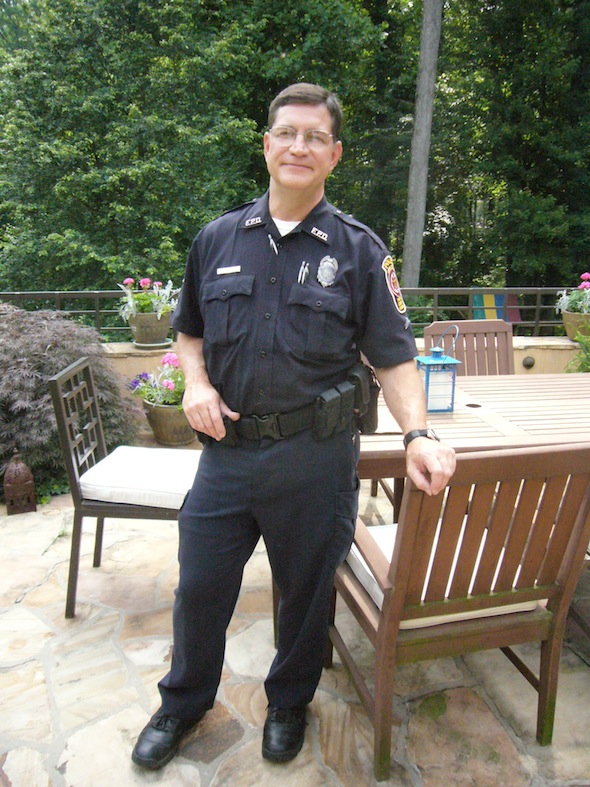 Officer Leiter from Animal Control came out and he told me the same thing.  He said the mother will probably come and get him. Deer mothers are really good mothers, they’re never far away. Another nice person who cares about animals, so he had to go on the blog!

I run off to a meeting and when I return to my surprise I find…. 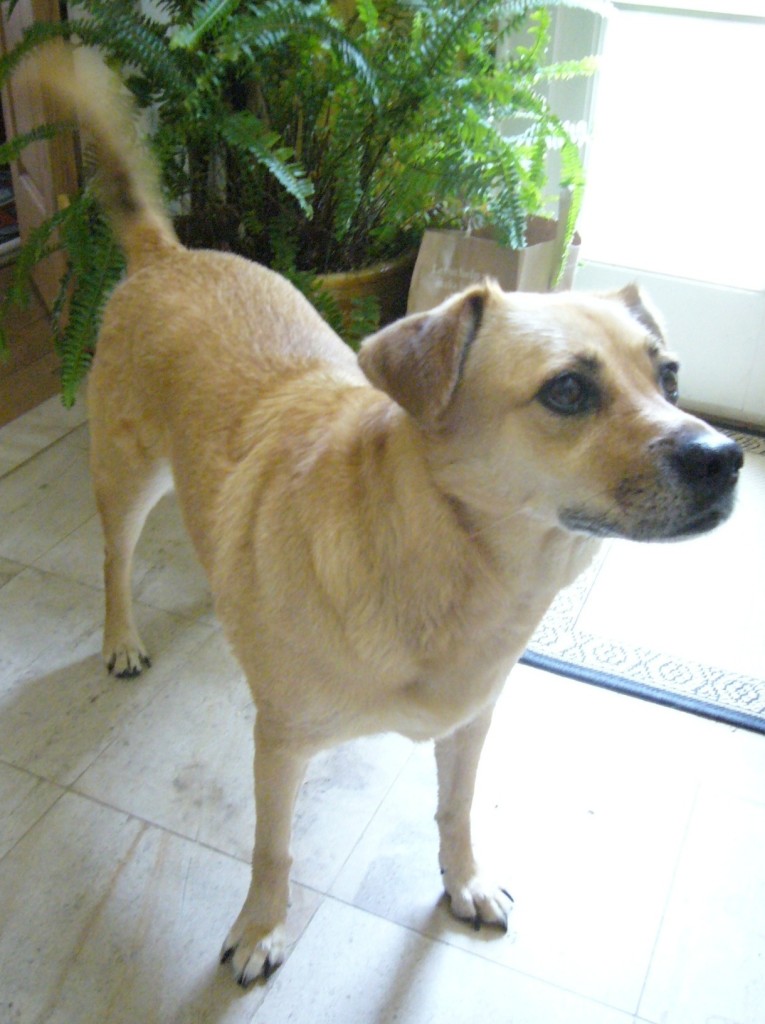 …LUCKY our dog, in the yard with the fawn following closely behind her!!! Lucky does not know what to make of the little creature , so she lays down the way big dogs do when they play with puppies. I call Lucky to come and the little fawn disappears in to the woods behind the house.

Work is insanely busy finishing up the new look EARTHY MODERN on LiveLikeYou. As we’re wrapping up work in the early evening I see through the window that Lucky is outside again, swimming in the pool with what looks like another dog….or is it??

NO it’s not a dog, it’s the FAWN back in our yard again!! The little fawn has fallen on the steps of the pool and Lucky is in the pool on the outside maybe trying to help her?

I jumped in and got the little fawn out of the water. 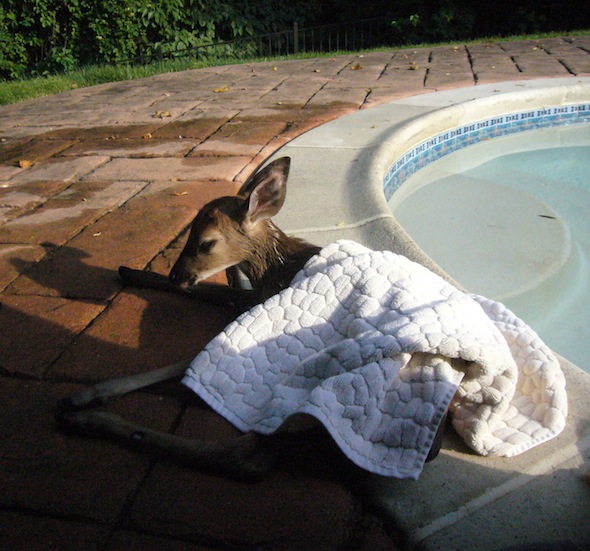 Luke, Jenny and I toweled him off a little bit to see if he was injured. He had a few scratches but we prayed he would be okay. 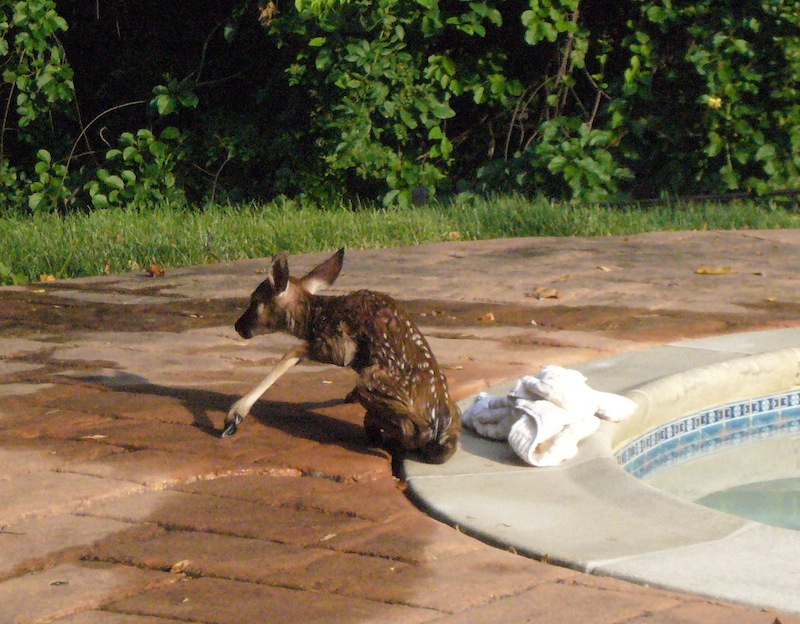 We stepped away to see what he would do… He stood up, walked a few steps, then started making loud screeching noises for his mother.  We walked inside so we wouldn’t scare the mother in case she was near.

When we came back out a couple of minutes later he was gone.

I REALLY HOPE HE IS OKAY! I can’t stop worrying about this little animal. 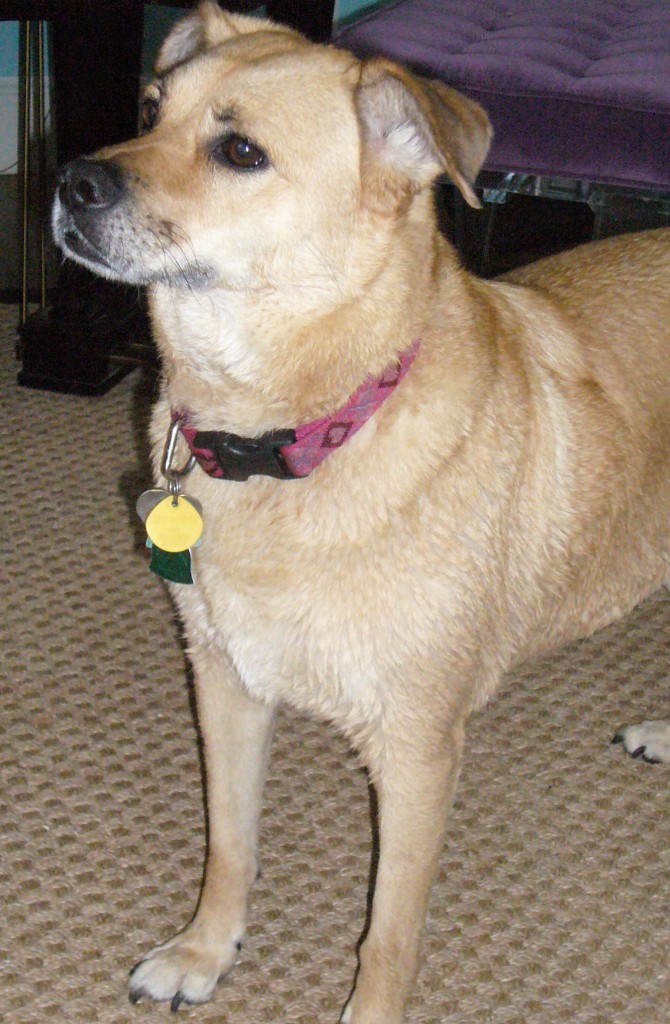 AND LUCKY might just be the best little rescue dog!! She is hopelessly in love with the little fawn.

Each personality on LiveLikeYou donates 5% of sales to a charity.  I was going to donate to one of the well known environmental organizations.  But I love small, passionate and effective charity organizations. So now I’m instead thinking this….

Isn’t it important we have people who take care of all the wild creatures out there? I know a lot of people don’t care for deer. I think they are magical creatures and part of our majestic nature.

Okay this was not about design, but I just had to share!

Have you ever rescued wildlife?

P.S. If you have  favorite charity in your town? Please e-mail me. We will set up every coming design look on LiveLikeYou with a charity.

29 thoughts on “Imagine my surprise when I saw this!”