As you go through life, your style and taste is always morphing, at least for me.   What was “YOU” a few years back might not be “YOU” today.   Rather than getting rid of furniture, I like to reinvent them.  As I’ve gone from a more French inspired old fashioned look to a more modern, it’s interesting to see how some pieces have “morphed” with me.

The chair that looks like this today in it’s fairly recent makeover with Kelly Wearstler’s Emereld Cut fabric  ( I used it inside out) now feels more like “me” than before. It looked like…. 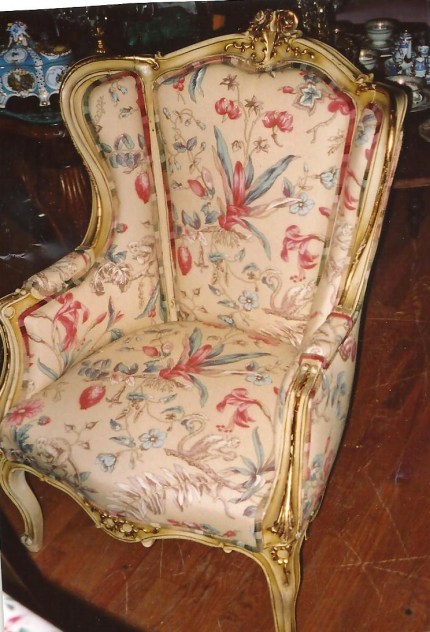 ..this when I found it.  It was done in muted green olive before it’s recent makeover. 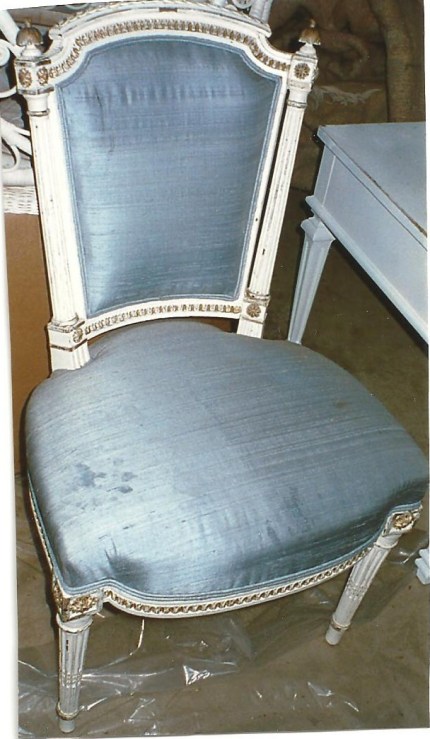 This French chair lived like this for a long time, until it needed an update, and it now looks like this…. 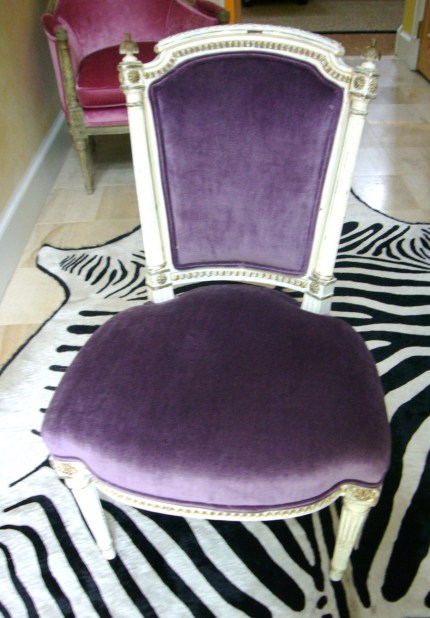 …in purple velvet.  I use it in a lot of places at home… 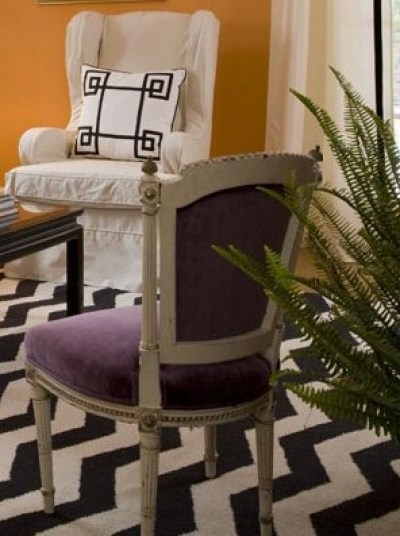 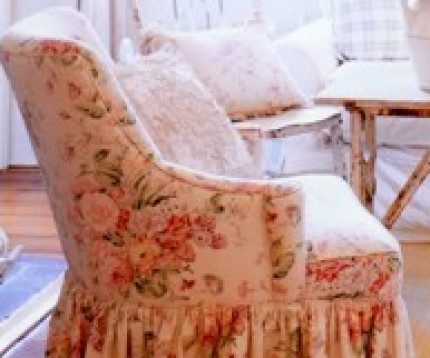 This flea market chair(I have two) I had upholstered in this sweet floral fabric a few years ago.  Instead of selling or donating the chairs since I liked the shape… 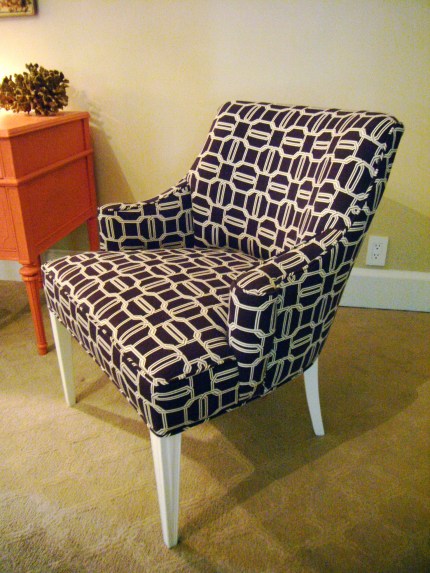 …I gave the chairs a revival in Kelly Wearstler’s Emerald Cut fabric and painted the legs white. 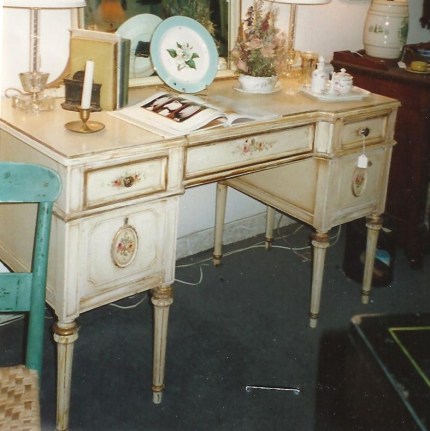 I’ve paired it with a desk that used to look like this. I loved it’s  vintage feel for a long time like this but decided to instead of buying a  new desk to reinvent what I already had.  I thought about it for a long time, because I don’t like ruining pretty paintwork.  But it was worn, and I would not make any money selling it so…. 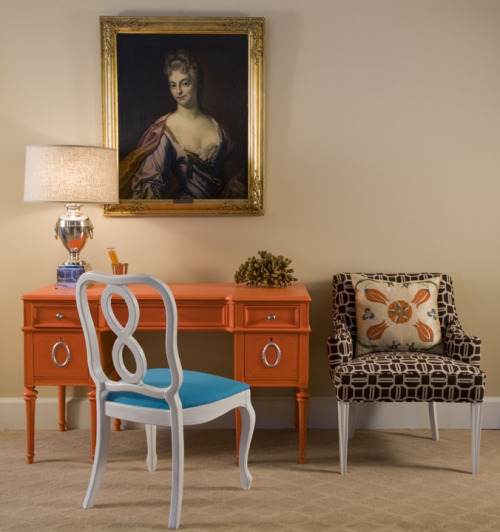 …I gave it a bright orange color with silver details.   Photograph by Geoffrey Hodgdon. 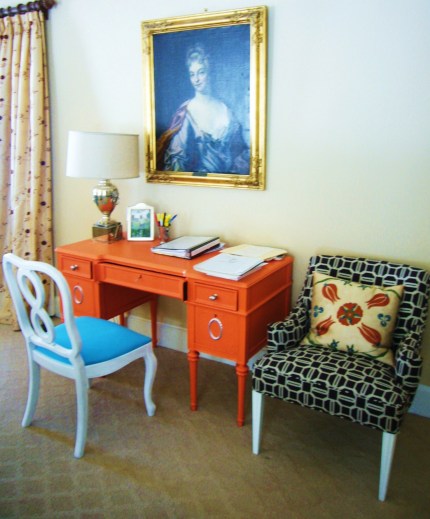 Here is a slightly messy snapshot of it, where you can see the next thing to get a modern makeover…the curtains!!

BUT AT WHAT POINT DO YOU NOT REINVENT FURNITURE PIECES? 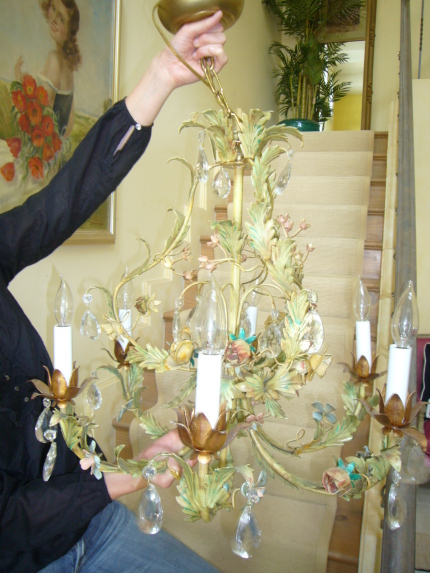 This BEAUTIFUL chandelier is in my basement. I probably way overpaid for it at ABC Antiques in New York.  I could sell it, but for a small fraction of the purchase price.   It doesn’t work in any of the rooms in my house.  It has a gorgeous paint job, but I have to be honest I’m…. 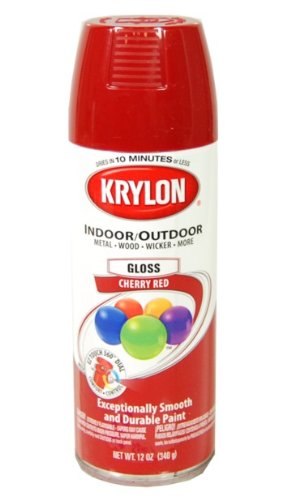 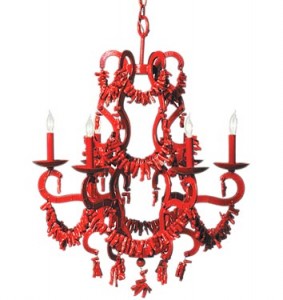 To try to make it look a little bit like my dream chandelier, that’s very pricey and out of the question to buy.   Because a great red chandelier would look so fun… 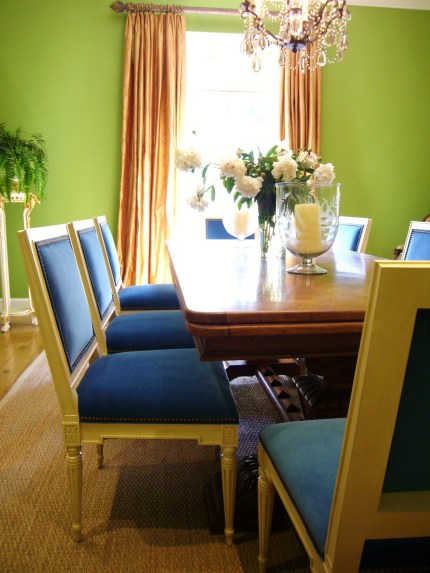 ….in my dining room!   Have been wanting to do it for a long time, but have been fretting over it.  But when I saw this room… 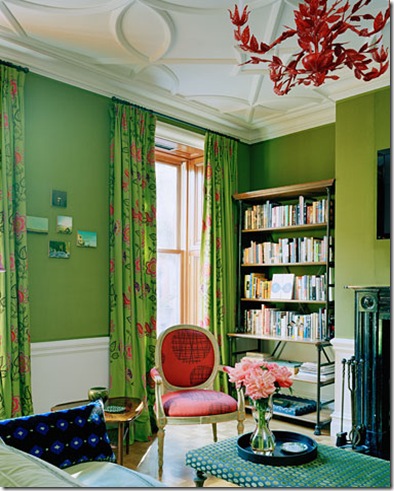 … in New York SPACES magazine last month I was inspired to do it again!!  But I feel kind of guilty spraying over pretty paint work and it will devalue the chandelier.  At the same time…why buy a new one and not use this one?  So the burning question is…

22 thoughts on “From old fashioned to modern…”