Tuman was the best dog in the world.  He lived with me for fourteen years and was the most amazing friend anyone could ever have. He was funny, loving, mischievous in his young years and the most loyal creature you could ever wish for. He would follow me around no matter where I went. If I went on a trip he would sit and wait and wait until I came back.

When he was younger he used to steal things out of the purses of guests, trunks of cars, people’s garages, and even steal lunch sandwiches from landscaping crews. But no matter what he did, no one could ever got mad at him, because they all knew he was just the best dog…ever. 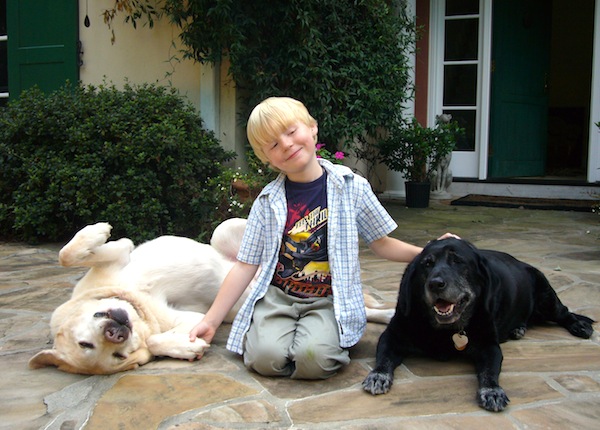 When Luke first was born, he was sad to no longer be the main “kid”.  But it didn’t take him long to become Luke’s best friend and protector as well.  When I got a divorce and Luke and I moved in to our new house, Truman and his best friend, our beloved Maggie, of course came along.  Maggie and Truman were completely inseparable.  When Maggie passed away from cancer and old age three years ago, it left us all completely heartbroken.

To ease the pain of his loss I let him sleep on the Pottery Barn couch in my bedroom right next to my bed. The couch was my first emergency purchase when I moved in to the empty house. It ended up against the wall in my then muted bedroom, always feeling a bit misplaced. 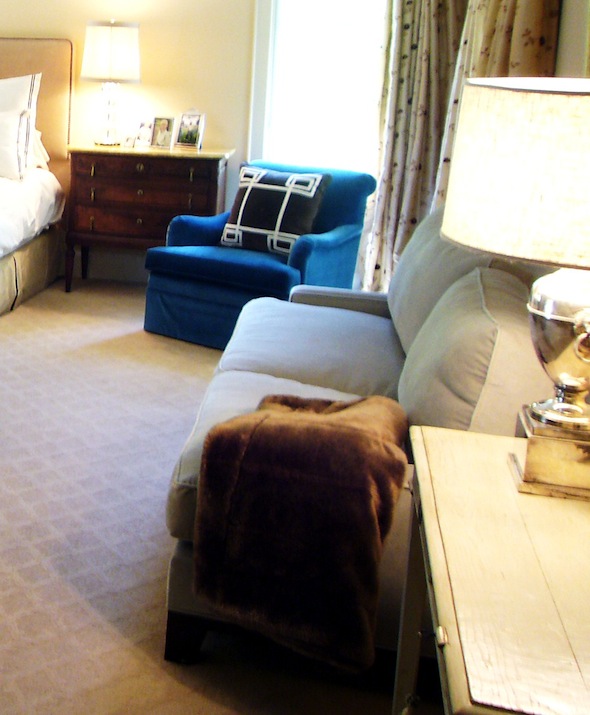 Truman slept on this couch every day for years. He would sometimes wake me up in the middle of the night from snoring so loud!  After a couple of years the couch, had spots and marks on it. And we all just referred to it as “Truman’s couch”.

As Truman got to be an old man, it became increasingly harder for him to get up on the couch, and we had to help him. In the end Dan and I would lift him up, so he could sleep in the most comfortable spot. 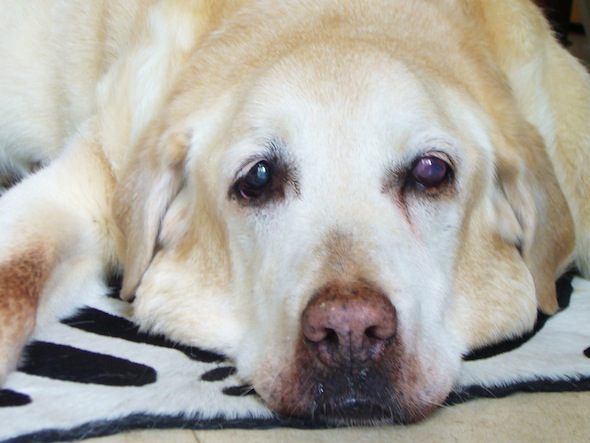 When Truman passed a year and a half ago, (this is how beautiful he looked on his last day), the couch was very empty…

As all pet owners know, it’s really rough, but life goes on…

To change things around I painted a desk I had orange and moved it in to the spot in the bedroom where the couch was.  The couch got moved in to a corner of the room, ready to be sold. Except I never had the heart to sell it. 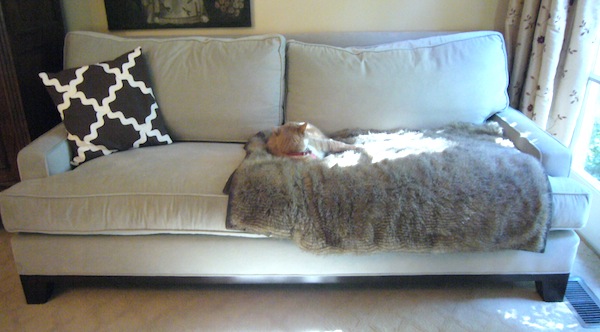 It was squashed in a corner of the room for a year.  Bellybutton loved to sleep on it there next to the window as it had just the right amount of sunlight filtering in.

When all the house redesign projects started a couple of months ago, we took a vote…. Do we sell the living room couch, or do we sell the Truman couch?

The vote was unanimous, we needed to keep the Truman couch.  Sometimes design decisions are made by purely emotional reasons. So the Truman couch would be getting the same treatment as many things in this house…going from muted to more of a technicolor vibe. 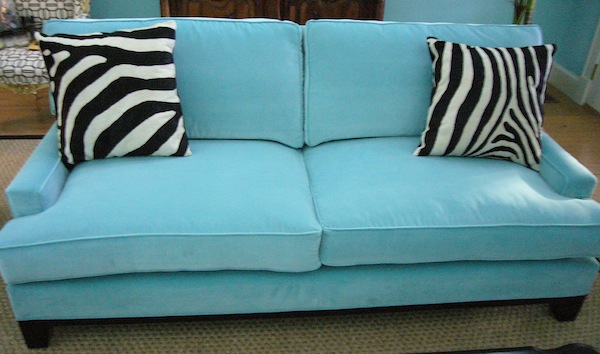 When it arrived yesterday it made us all smile!  It now has turquoise velvet to go with the newly aqua walls, and black lacquer legs. 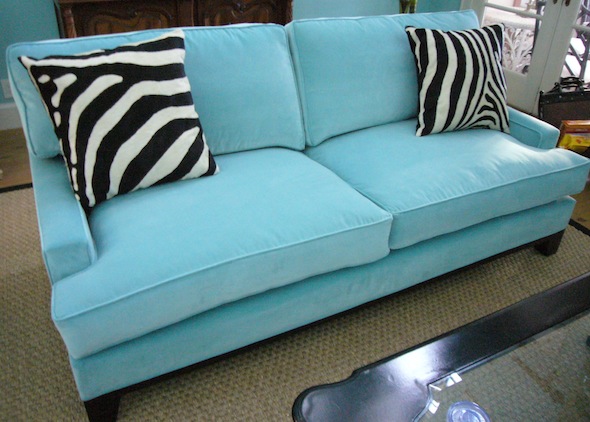 I wasn’t sure a Pottery Barn couch would be the best choice for the main area in the house, but I think it does Truman justice! 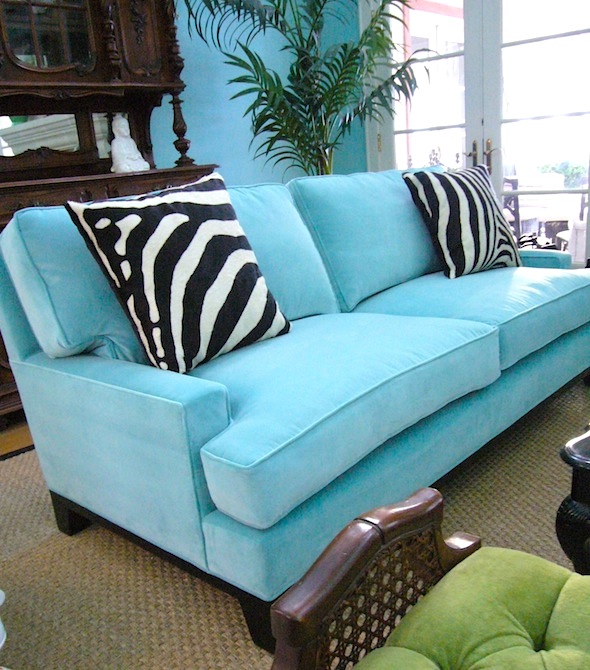 They say we live not only one lifetime, buy many different lives in one.  The Truman couch is now around for round # 2. 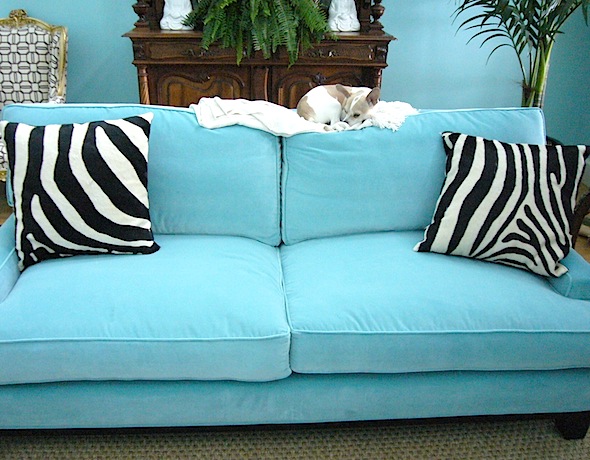 Our newest member of the family, which we named “Bubba” (Truman’s nickname)… 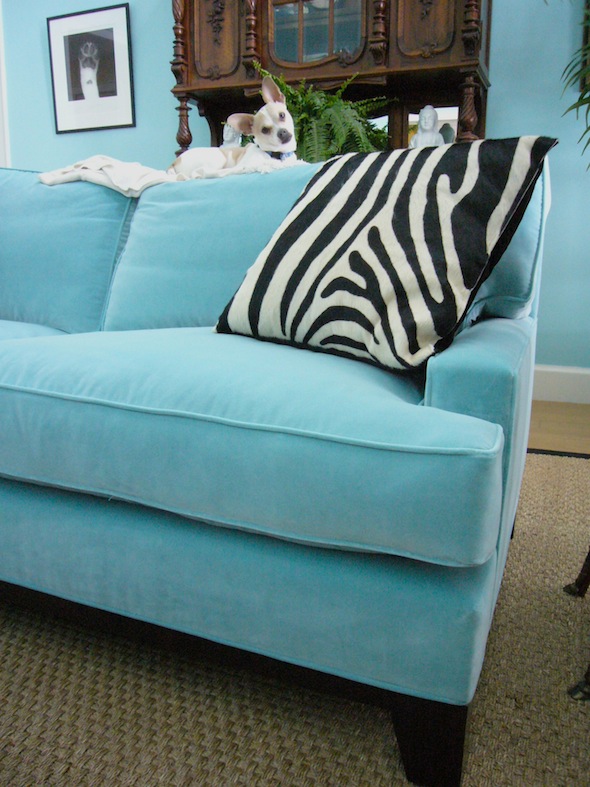