When Luke selected my old Julia Gray bed from our basement storage for his bedroom makeover, I have to admit I was very hesitant. It didn’t think it was the right vibe and it looked like a girl’s bed! But he was very convincing telling me this was perfect, because it looked like a bed for a king!!

I knew his design inspiration was coming from the virtual house he had created for his wizard character on his favorite video game. He designed it with two (one for a friend) giant, old fashioned “king” beds, skulls and walls with nothing but GIANT kegs of root beer! So I thought I could at least go along with the bed… 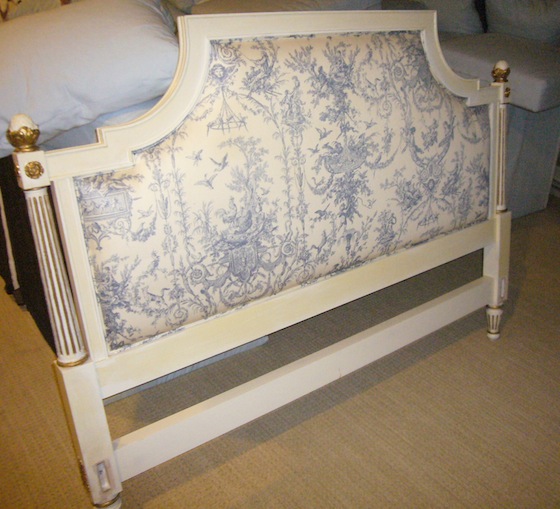 I reluctantly imagined how this feminine old fashioned bed with gold detailing would fit into a modern boy’s room? I feared it would look too”girly”, and that in a year from now he would be embarrassed by it. 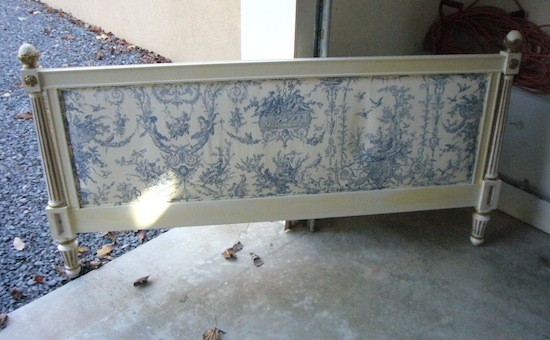 It was also a Julia Gray bed (designer bed), and I felt a little bit bad for thinking about painting over their finishes. (Sorry Julia Gray if you read this!!) But again…as you know I’m a big believer of using what you have first. And Luke was right -it does look a little bit like a bed for a king.

So I decided on a bright white lacquer, which I thought would look crisp against the cobalt blue walls. And Luke and I selected a rich dark navy velvet in hopes to make it boyish. But I was still worried about how it would turn out. Worried about blue on blue….maybe it would too dark, too boring. 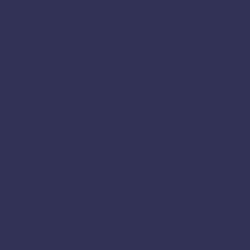 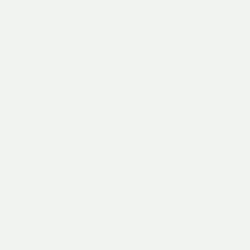 I suggested a wide black and white Dorothy Draper inspired stripe for the bed, but Luke wanted to stick to his blue theme.

I had Omar (my furniture re finisher) paint it, as I felt this “royal” bed deserved a professional job. 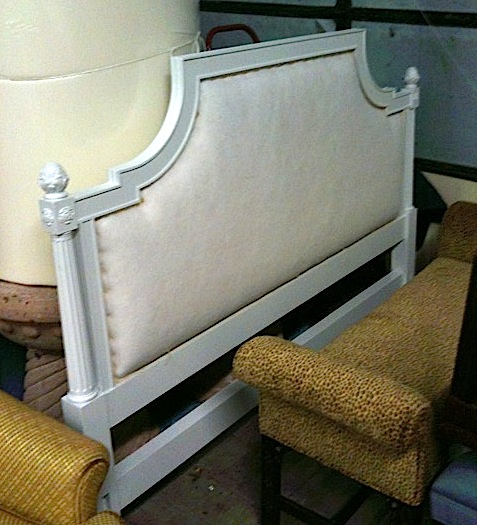 Then it was off to be upholstered, also something I could not do myself. Here’s an Iphone image of the bed at Cris upholstery shop. Again on a bed for a king you must forgo DIY’s!!

When the made over bed arrived yesterday, and we put it in Luke’s room, we were all pleasantly surprised! It really kind of looked “regal” and boyish all at the same time. And the blue on blue was not boring at all. 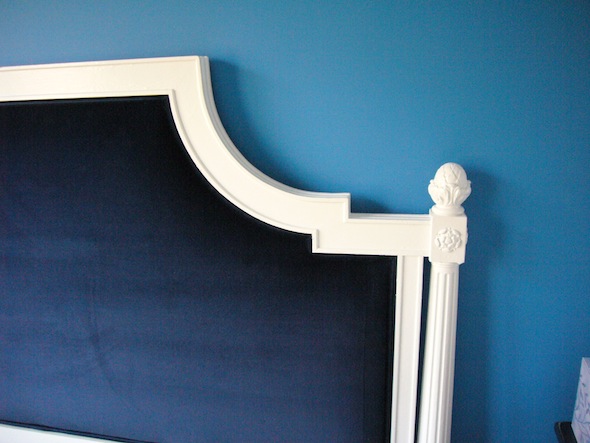 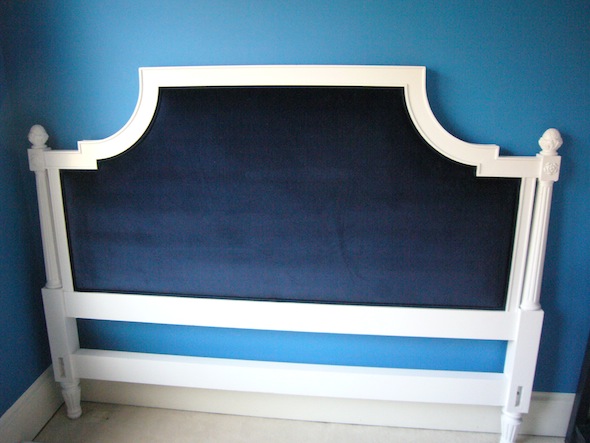 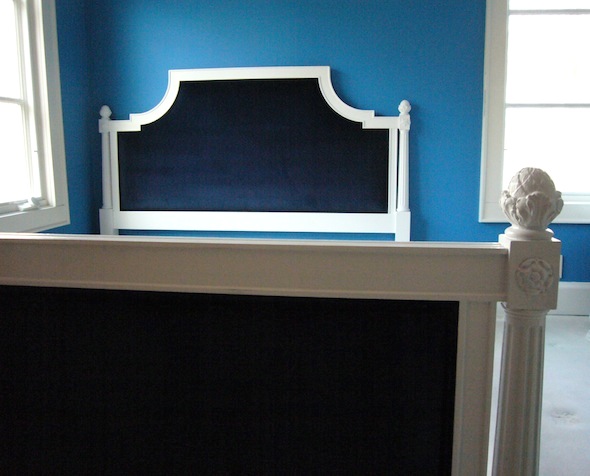 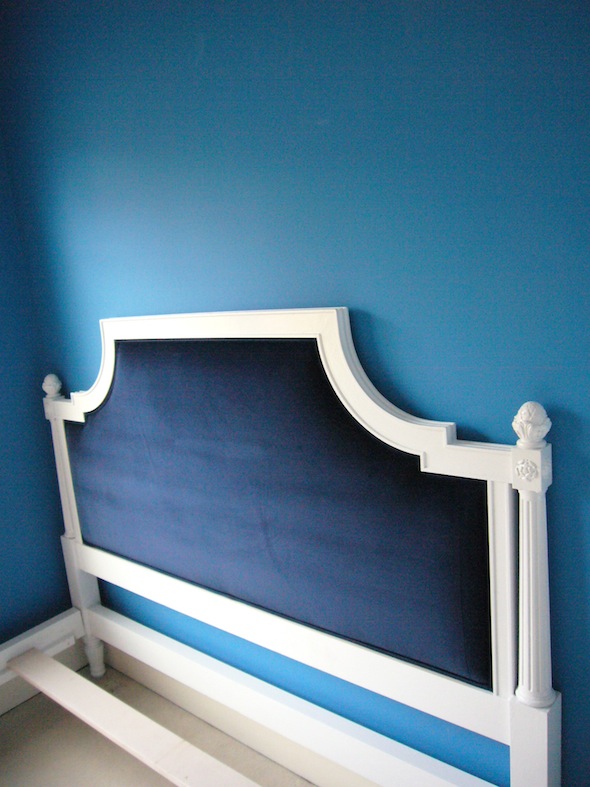 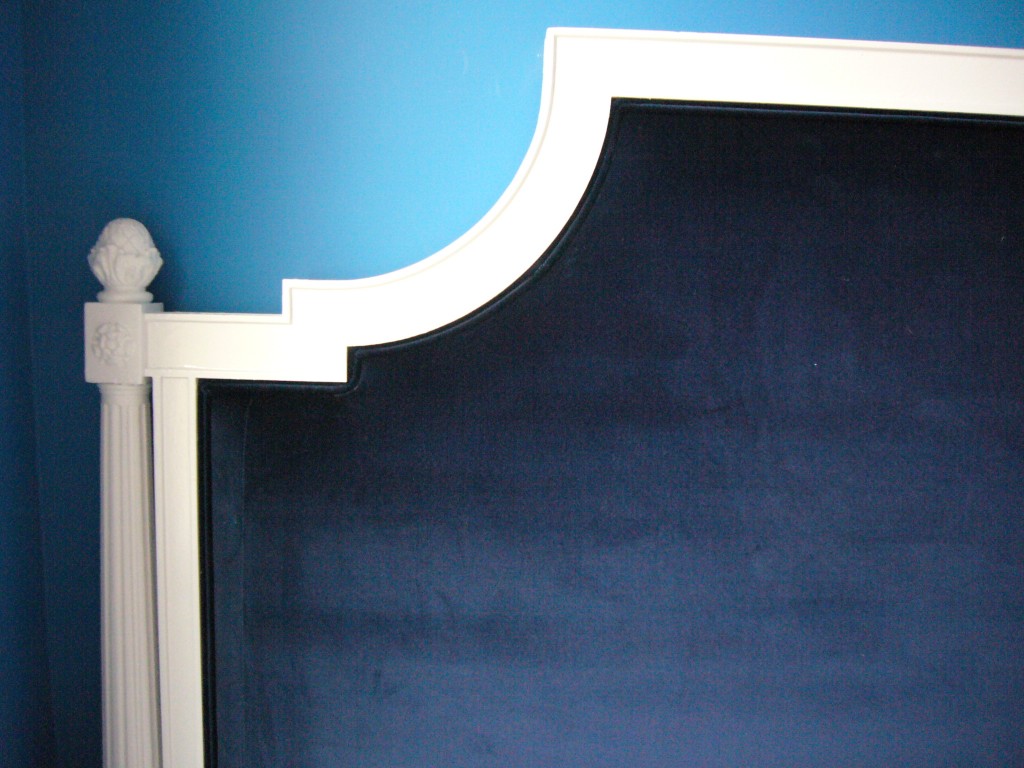 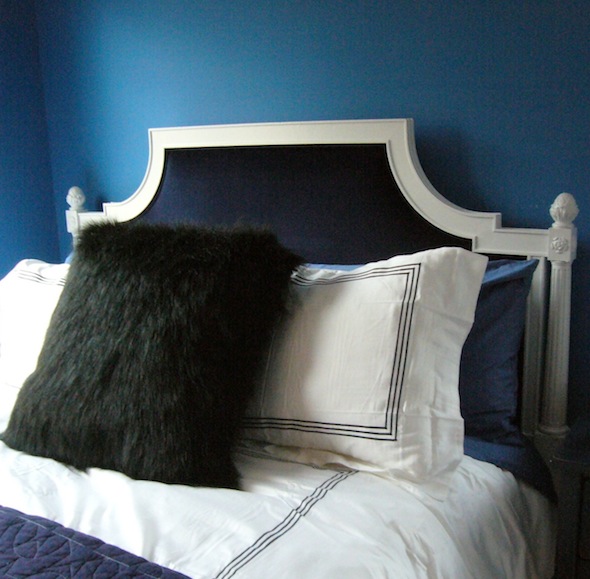 Luke was thrilled to sleep in his big bed. I got him blue sateen sheets for the full royal treatment.

The walls are done, the bed is done….it’s slowly coming together. More of the design to come soon!

Hope you all have a HAPPY WEEKEND!!!

3 thoughts on “Bed makeover – from girly to boyish!”